And we even published a detailed article on how to pitch stocks.

As an added bonus, there was an exceptional interview with one reader on oil & gas modeling case studies and stock pitches, where he explained how he moved from a large bank to a top energy fund.

Just one problem: I couldn’t share any of the models or documents back then.

I’m going to share with you a complex NAV model for an oil & gas company, plus a detailed 20-page stock pitch that were “inspired” by that previous interview.

Even if you sign up for every single in-person oil & gas training program and buy every single oil & gas book on Amazon.com, you will not be able to find anything like this.

Keep reading, though, and it’s yours for free.

You’ll also learn why even a well-researched and extremely in-depth stock pitch can be completely wrong and what to do when that happens.

The Video, the Tutorial, and the NAV Model

You can get all the documents and the video walk-through of the stock pitch right here:

WARNING: This is an advanced-level model. If you’re a beginner, you will be lost.

If you feel comfortable with models of this complexity, this is a great template.

Here’s the full explanation of the pitch, the process, and what went wrong in real life:

We take a critical look at Ultra Petroleum [UPL], a US-based oil & gas company in the exploration & production (E&P) sector, in this recommendation.

It is not a huge company – at the time of the pitch, it had around 3.1 Tcfe of Proved Reserves, 257 Bcfe of annual production, and $800 million in annual revenue.

But it’s interesting for a few reasons:

And then there were other fun bits – for example, the company’s reserve numbers did not add up if you scrutinized them in-depth.

1) Overstating its Estimated Ultimate Recovery (EUR) per “average” well (EUR is the amount of reserves in a single well); or

Take a look at this gem from an earnings call transcript:

You can research these points by reading investor presentations, annual and interim reports, and commentary online.

The Structure and the Process

You can still use the same structure for any stock pitch in any industry:

Before diving into a complex Excel model like the one here, you really need to think about potential reasons why the stock may be mis-priced, catalysts, and risk factors first.

Otherwise, you might spend a week on a complicated model and then find that it’s not a great company to pitch in the first place.

With this UPL pitch, you know in advance that your model has to support an acquisition, sensitivities around expense assumptions, different drilling schedules, and sensitivities for the average EUR per well.

If you have those end goals in mind before you even start the Excel work and presentation, your life will be much easier – and you can figure out all of this by doing 30 minutes of reading.

For E&P companies, the Net Asset Value (NAV) model is by far the most important methodology, so we skip full comparable company analysis and precedent transactions.

We’re also skipping them because they wouldn’t be as accurate due to the company’s recent acquisition.

The NAV model linked to above may seem intimidating, but the underlying idea is not that complicated.

First, you split the company into its Proved Developed (PD) Reserves and its Proved Undeveloped (PUD), Probable (PROB), and Possible (POSS) Reserves.

You do that because the PD Reserves are already producing, or can start producing relatively quickly, while the others require more CapEx spending and development time first.

You also do it because you rarely have granular data on the PD Reserves.

So at a high-level, the valuation process in this NAV model is as follows:

We cover this model across 15 hours of video (~200,000 words of explanation) in the Oil & Gas Modeling course, so this is a very high-level summary.

Next, you need to use these numbers to make a decision.

How to Make a Decision

Sometimes, you get lucky and the company is clearly overvalued or undervalued.

In this case, we’re not so lucky:

At gas prices at that time, the company would have been valued about appropriately – so we move into the next step: sensitizing the assumptions we are most uncertain of.

We could look at 5,233 different assumptions here, but the one we’re most uncertain of is the EUR per well since the company gave contradictory information on those figures.

Figures for the D&C costs per well, LOE per well, and IP (Initial Production) Rate per well are much more “set” because a ton of historical data backs those up.

By looking at the EUR per well vs. commodity prices, you can draw a conclusion quickly:

Of course, you should also look at the other assumptions and see if being wrong on one of those will push up the valuation (they don’t make a big difference here).

Here, the company looks overvalued based on the EUR per well sensitivity, so we lean toward a “Short” recommendation.

Once you have enough data to lean in one direction or the other, you move to the next step and link the catalysts you found to this output.

But the potential catalysts are different. Here’s a set that’s specific to oil & gas:

In this case, we’re looking for catalysts that might push down the company’s stock price and that we can tie to specific dollar amounts in the model.

So our 3 catalysts are:

You can read for yourself how we make the case that each of these catalysts could push down the company’s implied value.

The most important parts are:

At the end, we also point out that even if none of these catalysts pans out, the company is valued appropriately right now… so we shouldn’t lose money (theoretically).

Once you’ve explained the catalysts, you give the top risk factors and explain how you might mitigate them.

It’s easiest to “reverse” each catalyst and ask, “What if this doesn’t happen?”

You can go beyond these risk factors by digging into the company’s filings.

One example for UPL: the company was working on improved well spacing at this point in time.

So instead of drilling 1 well every 50 acres and getting, say, 5 Bcfe of reserves from it, the company might be able to drill 1 well per 10 acres of land instead.

They would get less than 5 Bcfe per well by doing that, but they wouldn’t necessarily get 80% less.

So if the EUR per well drops to only 2 Bcfe rather than 1 Bcfe, the effective reserves would increase.

We point out the per share impact of each risk, and conclude with our “worst case scenario”:

“However, going above $30.00 per share seems unlikely since gas prices would need to rise above $5.00 per Mcf, and EUR per well would have to be 15-25% greater than the company-provided figures for that to happen.”

So, it seems like an in-depth stock pitch, backed by a complex model with granular data…

What could go wrong?

In fact, something even worse than the “worst case scenario” happened here because the company’s stock price has increased by over 50%, and closed at $30.01 as of the time I’m writing this.

Why This Recommendation Was Incorrect… and What to Do About It

This chart tells the whole story: 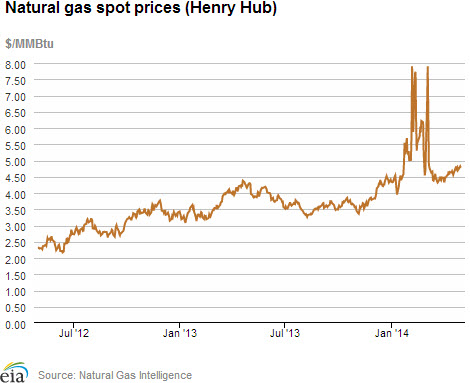 For reference, here’s what the model says the company is worth at different long-term natural gas prices (with no other toggles or sensitivities modified):

No one can predict exactly how commodity prices will change over time, but they are a huge risk for any energy stock (we didn’t list them as a catalyst or risk factor since they affect all energy companies).

It was also not the best idea to make a “Short” recommendation for a natural gas stock heading into the winter in North America, Asia, and Europe – gas prices tend to increase whenever winter is coming.

Next, the company also reported some positive news in the months following this pitch:

Another factor: the stock price had already fallen substantially in the years prior to this recommendation:

Technically that shouldn’t matter, but the stock market is not logical.

Stocks that have plummeted will often see a rebound at some point because… enough is enough?

As with most “Short” recommendations, timing is essential.

For more on why that matters so much, check out this excellent “Short” pitch for Conn’s.

Here, we still believe that UPL is overvalued and is even more overvalued now – but that can be completely irrelevant if you get the timing wrong (see: the long-term chart for Conn’s).

We knew about many of these risks in advance, which is why the pitch recommended a buy-stop order in the $23.00 – $24.00 per share range.

For Even More on Oil & Gas Modeling and Stock Pitches…

This article, the model and stock pitch, and the video tutorial above are already more detailed than most paid training programs on the market.

If you want more, there’s now a set of 41 lessons on this model and stock pitch included in the BIWS Oil & Gas Modeling course (short outline and long-form course outline).

If you’re interviewing for energy-related public markets roles (hedge funds, equity research, asset management, etc.) this new set of lessons will be very useful – and they’ll be even more useful if you’re about to start working in one of those groups.

The course goes into more depth than typical case study exercises, but wouldn’t you rather be over-prepared?

And before you ask: yes, similar stock pitch analyses are coming to the rest of the courses.

The goal is to base every module of every course on an investment or acquisition recommendation (for buy-side roles), or advice to a company on M&A and financing options (for IB roles).