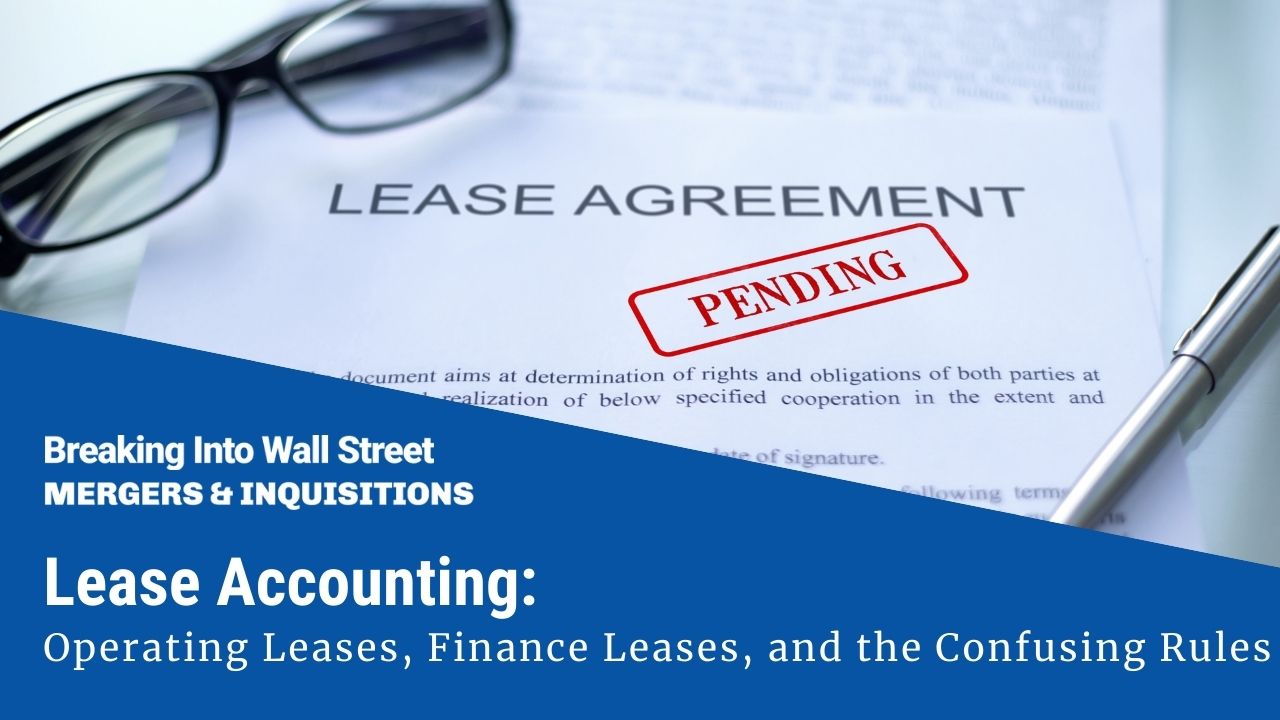 Lease accounting is an unusual topic because the concept is more difficult than the real-life usage.

Normally, it’s the other way around.

For example, methodologies such as the comparable company analysis and DCF model are simple conceptually…

…but when you apply them to real companies, you run into problems such as confusing financial statements, unclear revenue/expense drivers, and questionable “adjustments.”

But the fact that real companies have dozens or hundreds of leases makes the modeling process easier – for the most part.

We’ll cover all of that here, but let’s start with a quick overview of lease accounting and how the rules for Operating Leases changed in 2019:

The Short Version of Lease Accounting

You can get the YouTube version of this tutorial as well as the files and resources below:

According to the rules under IFRS 16 (ASC 842 in U.S. GAAP), which went into effect in 2019, companies now treat leased assets (e.g., buildings and equipment they are renting) as if they had purchased the assets using debt.

(There are some minor exceptions, but we’re ignoring those and focusing on the most common cases here.)

When a lease is first signed, the company creates a “Right-of-Use” (ROU) Asset and a corresponding Lease Liability on the other side of the Balance Sheet.

Then, the company pays the cash lease expense each year based on the terms of its lease.

The new lease accounting rules do not change the cash flows associated with lease payments.

All they do is change the representation of leases on the financial statements.

Specifically, companies now calculate “Interest,” “Depreciation,” and “Principal Repayments” for all their leases – pretending as if they are Debt-funded PP&E.

Under IFRS, companies record these items directly on the financial statements.

Therefore, “Interest Expense” for an IFRS-based company includes actual Interest paid on its Debt as well as “Lease Interest.”

The same applies to Depreciation and Debt Principal Repayments.

For a single lease with fixed annual payments, the Interest and Principal Repayments change each year, the Depreciation stays constant, and the ROU Asset and Lease Liability decrease each year, reaching $0 by the end of the lease term:

Under U.S. GAAP, companies use this same treatment for Finance Leases but not for Operating Leases (see below).

For Operating Leases under U.S. GAAP, companies record a simple “Rental Expense” or “Lease Expense” on their Income Statements.

However, they still calculate the Interest, Depreciation, and Principal Repayments and change their Operating Lease Assets and Liabilities based on those.

But under U.S. GAAP, they don’t show these numbers directly on the financial statements!

Because the U.S. GAAP treatment differs for Operating Leases and Finance Leases, we need to explain how they’re different.

With an Operating Lease, a company signs a contract to rent a building or piece of equipment for a certain period, pay a certain amount each year, and return the building or equipment to the lessor at the end.

For example, the company might pay $20 per year over 10 years to rent equipment, and it will return that equipment to its owner after those 10 years.

A Finance Lease for the same equipment has the same annual payments, but at the end of the term, there is an “ownership transfer” or “bargain purchase” option, so the company has some ownership potential.

There are other criteria for classifying the lease as well (e.g., if the lease’s term exceeds 75% of the asset’s useful life or if the Present Value of lease payments exceeds 90% of the asset’s fair market value).

But in real life, companies list leases by category in their financial statements, so you do not need to determine or classify anything.

We’ll start with the IFRS treatment for a single lease with constant annual payments because the IFRS rules are less confusing as they apply to both types of leases.

We’ll use these assumptions:

Initially, the company creates a Lease Asset based on the Present Value of the lease payments over the next 10 years:

It also creates a corresponding Lease Liability based on the same calculation.

Each year after that, the company records Lease Interest, Lease Depreciation, and Lease Principal Repayments based on the following calculations:

The Lease Interest + Lease Principal Repayments, or the total cash outflows, always add up to the $20 annual lease expense: 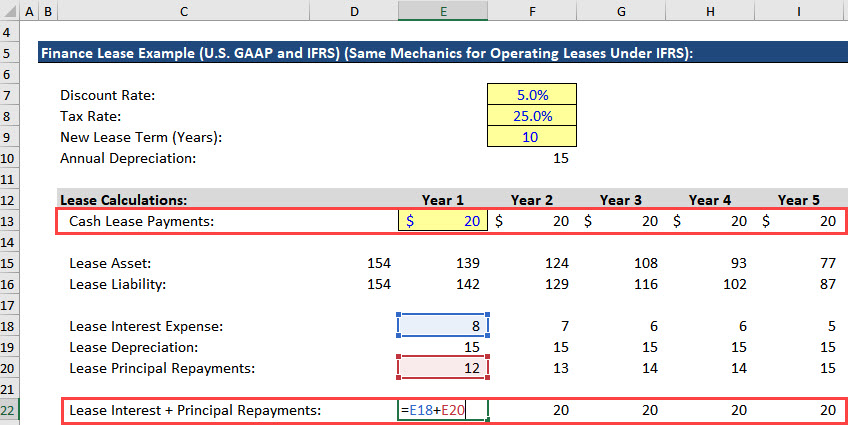 If it’s not a constant $20 payment per year, these relationships will be slightly different because the Cash Lease Expense will keep changing.

Under U.S. GAAP, Finance Leases have always followed the treatment outlined above.

For an Operating Lease under U.S. GAAP, a company still creates a Lease Asset and Lease Liability in the same way (based on the Present Value of future lease payments).

But the company records a simple $20 Rental Expense on the Income Statement each year under Operating Expenses:

That may “seem” easier than the IFRS treatment, but the company still calculates Lease Interest, Lease Depreciation, and Lease Principal repayments and changes the Lease Asset and Lease Liability each year.

But the rules are slightly different:

The result is that under U.S. GAAP, the Lease Asset and Lease Liability should decrease by about the same amount each year (for a single lease): 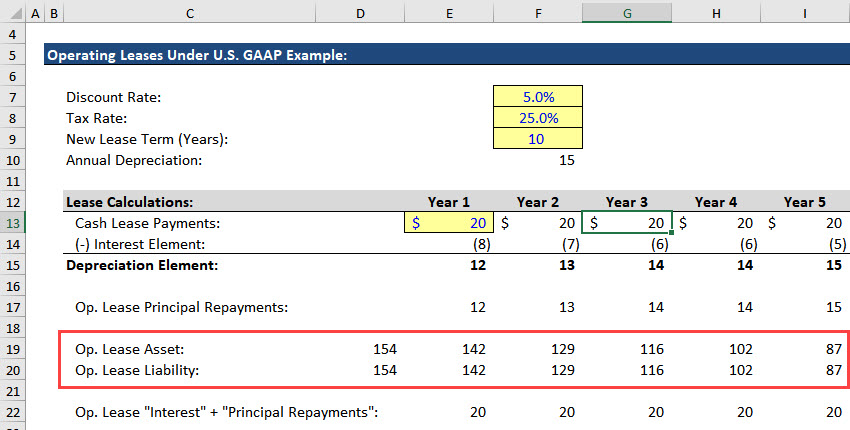 Even though the company calculates the Lease Depreciation and Lease Principal Repayments, it does not show them directly on the statements.

Some companies also consolidate them with other line items, so you have to dig through the footnotes to find them.

Lease accounting in real life, such as in 3-statement models, is easier because large companies have portfolios of leases with different start and end dates.

Companies never disclose enough information to create a schedule with each asset and lease, so the best you can do is approximate.

If a company is growing, the following should happen over time: 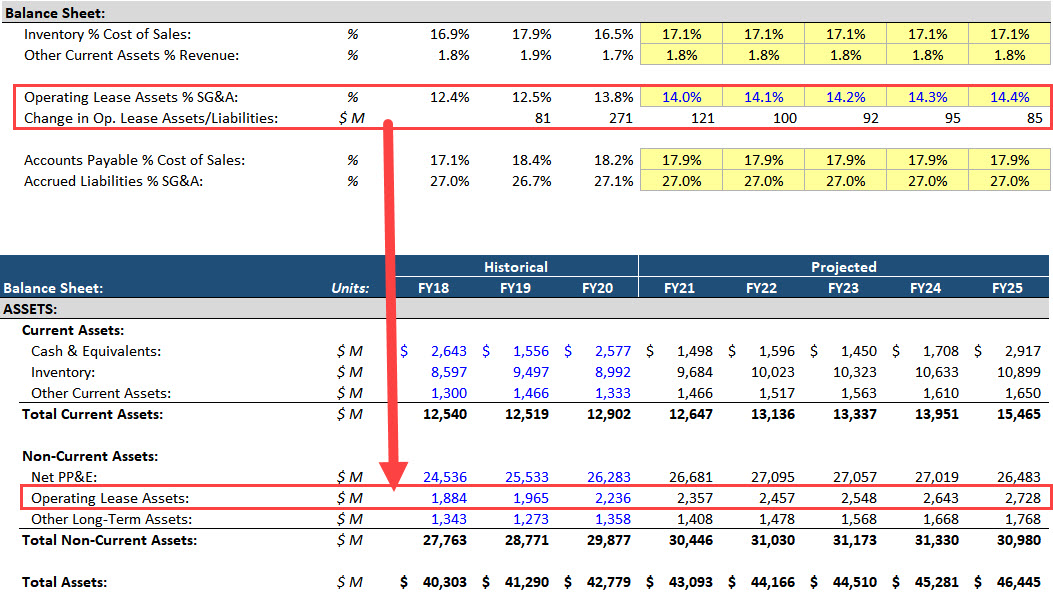 If you’re wondering about Finance Leases under U.S. GAAP, they’re often so small that they’re not even worth forecasting separately; many companies even group the corresponding assets with Net PP&E and the liabilities with Debt.

It’s more complicated under IFRS because you need separate numbers for the Lease Interest, Lease Depreciation, and Principal Repayments.

The easiest approach is to make these items percentages of line items such as Revenue or Operating Expenses or to link them to metrics such as the leased square feet or the number of leased buildings:

We strongly recommend keeping these line items separate from “normal” Depreciation, Interest, and Debt Principal Repayments because Leases are not, in fact, normal Debt – despite the accounting treatment.

The main valuation questions are:

With question #1, under IFRS, it’s easiest to add both Operating Leases and Finance Leases when moving from Equity Value to Enterprise Value.

That is because TEV-based metrics such as Revenue and EBITDA already exclude or add back the Lease Interest and Lease Depreciation (EBIT is more problematic – see below).

If the denominator does not deduct an expense, then the numerator should add the corresponding liability.

Under U.S. GAAP, it makes sense to add Finance Leases to Enterprise Value for the same reason: metrics such as Revenue and EBITDA already exclude the Finance Lease Interest and Finance Lease Depreciation.

But if you want to use multiples like TEV / EBITDA, you cannot add Operating Leases – because EBITDA already deducts the full Rental Expense.

It’s the complete opposite of the IFRS treatment, so if you do want to add Operating Leases to Enterprise Value for a U.S. company, you have to use metrics such as EBITDAR that add back the Rental Expense: 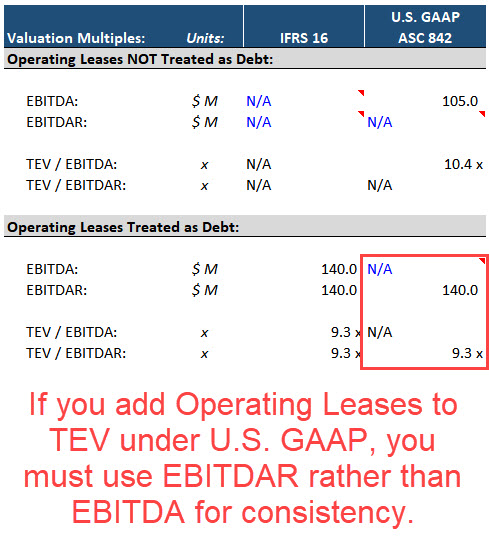 We don’t think this step is useful in most cases, but if you want to compare U.S. companies and non-U.S. ones, it is required.

The DCF model should be based on cash flows, and regardless of how the company records its Lease Expense, it still pays the same amount in cash each year.

Therefore, we believe it is best to deduct the full Lease Expense when calculating Unlevered Free Cash Flow under both U.S. GAAP and IFRS.

Some people argue that Leases are “part of the capital structure” and should be counted as Debt, which means you do the opposite of everything above (add back the full Lease Expense in UFCF and subtract Leases in the bridge and the WACC calculation).

But I do not find this argument persuasive; one key difference is that there is no actual “funding cost” associated with Leases, unlike with Debt (Interest) and Preferred Stock (Preferred Dividends).

Under U.S. GAAP, the treatment for Operating Leases in a DCF is simple because EBIT already deducts the Rental Expense on the Income Statement.

So, keep it deducted in future periods and do not subtract Operating Leases in the bridge.

To be consistent, you should also deduct the Finance Lease Interest Element and then not add back Finance Lease Depreciation in the UFCF calculation: 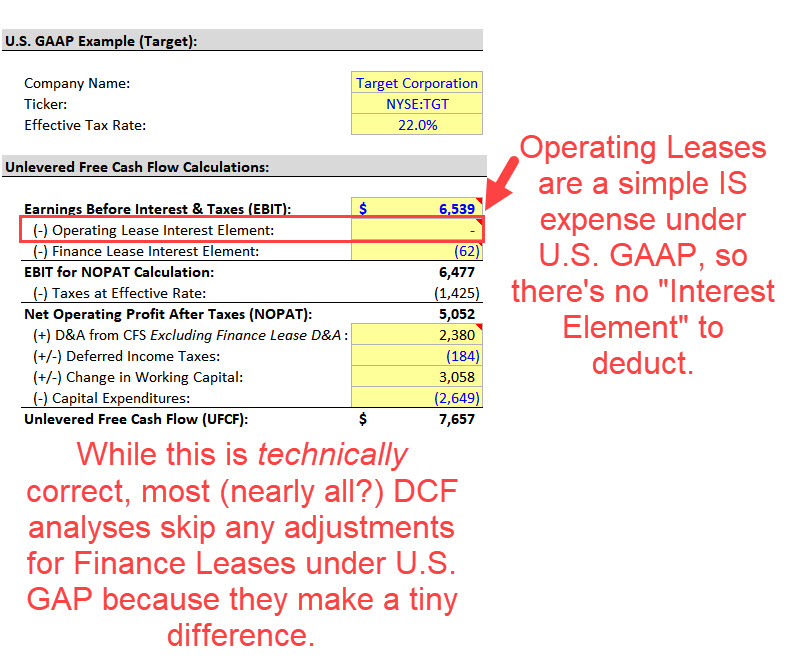 And if you do this, then you do not subtract Finance Leases in the bridge.

In reality, many people skip this step because Finance Leases tend to be small, and they’re often grouped with Debt.

This adjustment might shift the results by ~1-2% for most companies, so you can easily skip it (we skip it in the DCF examples on this site).

Under IFRS, the adjustments are slightly different.

The problem is that EBIT deducts only part of the full Lease Expense: the Lease Depreciation.

Therefore, you adjust it by deducting the Lease Interest and multiplying by (1 – Tax Rate) to calculate NOPAT.

Then, in the non-cash adjustments, you add back only the non-Lease Depreciation: 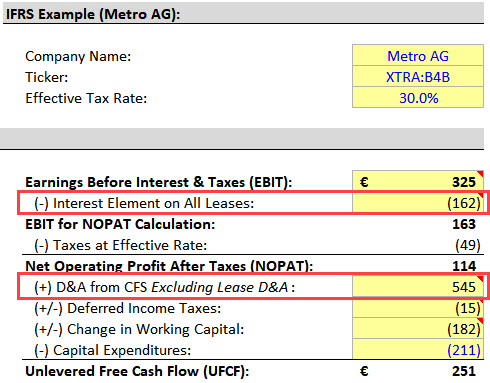 In the bridge, follow the same treatment and do not subtract Leases at all.

This Seems Complicated – How Important is Lease Accounting for Interviews?

Everything above may seem confusing and arbitrary, and it is.

The differences between IFRS and U.S. GAAP and the setup of many companies’ financial statements make the proper treatment tricky in certain cases.

That said, I don’t think this topic is critical in investment banking interviews.

You’re unlikely to get detailed, multi-step questions about lease accounting.

But you should know the basics, such as how Lease Assets and Liabilities get created and how they decrease over time for a single lease.

Certain groups and regions (e.g., Germany) are known for asking difficult technical questions, so if you’re interviewing there, expect more difficult questions about this topic.

Finally, remember that lease accounting does not change a company’s cash flow.

Regardless of how companies record these line items, they still pay the same cash amount for their leases.

If you go back to that principle, you’ll be able to understand everything above – even though the accountants want to confuse you as much as possible.